The ignition system uses William Wynne's dual point distributor plate. Each coil is powered by a separate battery, and two condensors and sets of points, with an MSD 8210 coil switcher handling coil selection automatically. Both fuel and ignition systems and their wiring are independent of the rest of the electrical system, and are toggled by a DPDT (double pole, double throw) heavy duty MS quality switch, a Honeywell 2TL1-3D (MS24524-23)One flip of the switch swaps out the entire ignition system (including battery, but excepting MSD coil switcher, coil wire, and spark plugs and wire) AND the entire fuel system (except carburetor), all the way to the fuel tank. I can't think of any better way to concentrate on "flying the plane" if something goes wrong. Note that the starter works with either system, even though it's isolated from the "backup". All backup wiring is run separate from other wiring in case of total "meltdown". I check the backup system during runup before each flight, and usually check it a time or two during each flight, just for kicks. Although not shown in the schematic, I have a bicolor LED that is normally "water clear", and turns green when the normal system is on, and flashes red when the backup system is on. The backup battery is in the tail, which also helps move the CG aft a little to offset the Corvair engine.

If flipping the DPDT switch doesn't fix it, you might as well pick out a landing spot! Flipping that switch happens without any change in fuel pressure, rpm, or any other clue that both systems were just replaced, other than a minor stumble as the backup coil builds it's field. I was bragging to my wife how I was the only guy I knew of that'd ever done this and she replied with a smile "Is that good?" I should add that WW thinks it's pretty cool too.

One improvement I'll make shortly will be to add a Rabbit/Golf "fuel pump relay" to the main ignition system. This relay is very reliable, and basically ensures that no power is applied to the fuel pump if the coil signal disappears. This is handy if you crash, which is why VW has this relay in all of its gasoline powered cars. It's easy to turn all of this stuff off in an emergency landing from altitude, but a screwup on takeoff or landing doesn't always give you the time or the presence of mind to switch off the power to the pump, so this relay does it for you. In the rare event that the relay failed, the backup system would still be there, unaffected.

I've now flight-tested my "totally redundant fuel/ignition system", and it works great. I have two completely separate fuel systems, with each circuit having a 6 psi Facet pump (each fed by different electrical circuits), and ending in a tee that leads 12" to the carburetor (with fuel pressure sensor and Flowscan 210 flowmeter inline). 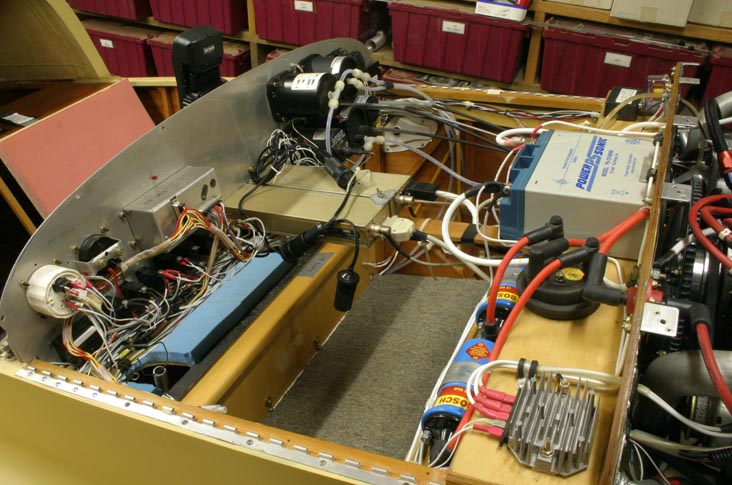 Here's the wiring behind the panel. My hard earned advice to you would be to do whatever it takes to buy Tefzel or Teflon MS somethingorother wire in COLORS, not just in white! It's not a perfect wiring job, but it's close enough for KR work. On the lower right you can see the dual coils and coil switcher, along with the John Deere voltage regulator. Power for this electrical system is a 20 amp lawn tractor "dynamo", or permanent magnet generator, which puts out a steady 14.5 volts.

UPDATE - DPDT FAILURE
The Otto switch that I originally installed wasn't as high quality as I'd expected. See http://www.n56ml.com/n891jf/panel/index.html#switches for details, but basically, I replaced the Otto with a far superior Honeywell 2TL1-3D (MS-24524-23), which is rated for 20A@28Vdc. And given the force required to actuate it, I believe it!